We did it!! Yes that is not the most poetic way to start a post but it reflects what we feel perfectly. Yesterday (Tuedsay, March 26) the co-founders of Leti Games, Eyram and Wesley, made the whole team proud.

Their talk, “The Emerging Landscape of African Game Development”, at the Localization Smmit at GDC 2013, was very well received (other words were used to better describe this…. for our ears only). The unique profile of Leti Games, not just a mobile game company, but a pioneer helping create the game industry in Africa, attracted a good audience.

We are not the only ones who think their talk was interesting, as even before the talk it was highly anticipated. Gamasutra knows what is what when it comes to the game industry and they highlighted the Leti Games talk, as one of their recommended lectures.

Another note worthy commentary on the talk and Leti Games at GDC 2013 in general is from Buzzfeed. It makes us feel proud to be part of this effort.

Their talk, entitled “The Emerging Landscape of African Game Development,” is something of an overstatement: Leti is only the second full-time game studio in sub-Saharan Africa. (excluding South Africa, which has a limited but significant history of game development). The two founders of Leti are not just the most promising company in the West African game industry; they are the West African game industry.

The co-founders are representing the whole team of awesome designers, story writers and developers at GDC and we are enjoying and revelling in it as much as we can from Ghana. However we do not think anyone here at the office can beat out this ear to ear grin from Eyram and Wesley.

As soon as we have access to a link for the video of the talk, we will post it up here for everyone to see. Until then you can enjoy some of the photos from just before the talks.

You can also find our complete GDC 2013 album on Facebook for all the photos we have from GDC 2013. 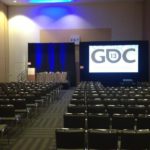 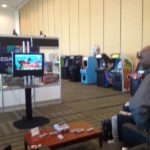 Once again, congratulations to the whole Leti Games team (in Ghana and Kenya) and our partners past, present and future.