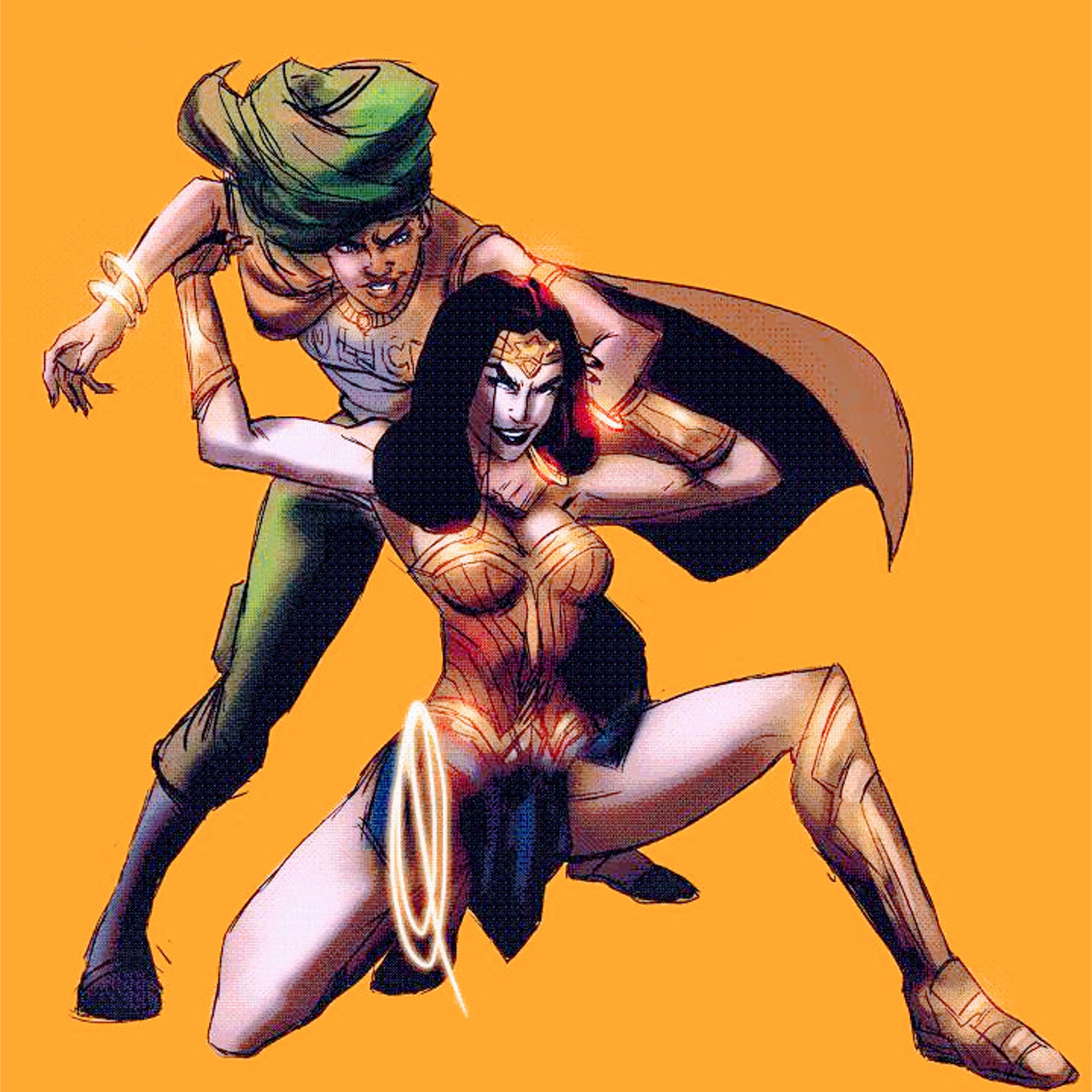 Give me a wave if you know of any five ‘supersheroes’ that have graced your screen. You might want to name them so you’re certain of the number. (And I hope you’re not thinking of Rapunzel and Cinderella)

I can’t tell if I was the only one who felt there was some sort of imbalance in there. But for years, I observed that just a handful of superheroes we watched, from cartoon series especially, were females and the rest were males. (A lot actually!) Don’t get me wrong, it was fun to watch them in action. But I felt females were not represented enough back then. Perhaps, they existed, but we saw just a few of them on our screens. (Could be)

Today, I am super excited to see an amazing artist put Africa’s Legend, Oya and DC’s character, Wonder Woman in one picture. One that I call a perfect picture because it tells a lot. (Oh yes!) It tells the times that we live in. That a lot of people now draw and display numerous images of female heroes from movies. This is an inspiration that makes females feel represented in that category. Even now, little girls boldly wear costumes to imitate these characters. (You should see them all dressed up)

It isn’t just beautiful. But it shows strength and dignity. And tells the story of how independent women can be. (Without losing their femininity)

In this 21st Century, you will all bear with me (at least) that a good movie like Black Panther and Infinity War portrayed feminine power and strength in various scenes. The way the female heroes worked in unison to take down the villains was awesome! (They do deserve an applause)

Just take a look at Chadwick Boseman who played Black Panther in the movie. This dude was surrounded by badass women. Right from Nakia his girlfriend, to Shuri – his sister, to Okoye the commander of the Wakanda army. (Even the army was made up of women ready to fight) Oh and not forgetting his mother who stepped in to help revive him when his opponent took him down on the battle field.

Let’s take a trip to Infinity War where you find Wanda Maximoff almost massacring Thanos. Believe it or not, at that point, it seemed that the life of almighty Thanos

was over thanks to her. Unfortunately, she was destructed by her opponents which helped the super villain get away. (I’m pretty sure Thanos did not want to die at the hands of a woman…LOL!) That would have been the trending news for 2019!! And it wouldn’t be surprising to find women saying to men that, “Even Thanos was taken down by a woman.”

Do you remember Alita Battle? Another one of a kind! (I personally feel she’s a supershero in a special category) This one just wouldn’t throw in the towel (never!) unless all alternatives had been exhausted. Was it surprising to find her with emotions? (That’s feminine, of course she’s got feelings to express) She even found love in a human and fought to keep him alive until he personally gave up.

And not forgetting the Wasp who aided Ant Man in accomplishing his goals. That was simply beautiful! Let’s not forget Gamora and Nebula; the sisters who always fought each other. Don’t get it twisted, they were not exactly the definition of enemies but competitors from Nebula’s perspective. Fortunately, the love Gamora expressed towards her sister changed everything eventually. That was how they grew stronger and broke away from their father’s oppressive rule.

And the appearance of our very own Karmzah has kept bad guys away thanks to her bravery acts. Would you believe she fights all the notorious people you could think of? This beautiful character gives hope to females especially with disabilities, to tell them that they are capable of anything. (How would you feel if you were represented this way? Awesome right?)

Do not forget that all these supersheroes had something in common; they knew how to love and make things work right (their signature).

The lyrics of Shaggy’s song titled ‘Strength of a Woman’ tells a powerful message about women in general. But can you imagine the song that will be sang for supersheroes (i.e. if someone makes one)? These heroes deserve some accolades for always standing firm and displaying bravery without losing their guard.

(Kindly note) Femininity here is not one that tries to take the place or the role of men but rather portrays more of what women can do with their unique abilities.

If you’re in dire need to learn about African Supersheroes, consider downloading the Afrocomix app to get extra feed ranging from wallpapers, through to comics and cartoons.

Thumbs up to Lai Draws whose art work caught my attention and inspired this write up!